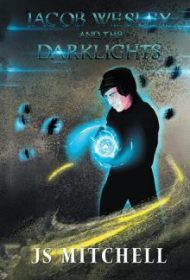 Identified as an original work of science fiction, this book reads more like fanfiction based on the Harry Potter series. Theme, plot, and characters are highly derivative, yet the story entertains by adapting the familiar and creating a parallel futuristic world of magic and mystery.

Twelve-year-old Jacob Wesley lives in a filthy orphanage run by a cruel woman who allows a bully to brutalize other boys. Jacob has long been the bully’s favorite target because of his unique eyes: pupils surrounded by gray and outlined in green. Then one day a neighbor transports Jacob to Cloudia, a colorful world high above the clouds.

The neighbor reveals that he’s been guarding Jacob for years until they could return to Cloudia where Jacob (aka The Light One) will train to fight Silas Follcane (aka The Dark One). At the Cloudian school, Jacob is sorted into Electro House and befriended by a nerdy boy and pretty girl. They also cavort with mischievous twins and a Neville Longbottom-type character and endure harassment by a mean boy and his buddies from Incendiary House. The confrontation between The Light One and The Dark One is inevitable and suggests the possibility of future installments.

As this shows, the author skillfully captures the spirit of Harry Potter—mystery, magic, adventure, playfulness, and danger—often with his own twist. His writing style is lively and imaginative, but unfortunately the story will be largely predictable to Harry Potter fans. The book’s highly derivative aspects and numerous typos keep it from achieving greatness.

Still, for young adult readers who can ignore (or embrace) the many borrowed elements,  this book provides a lively and fun diversion.