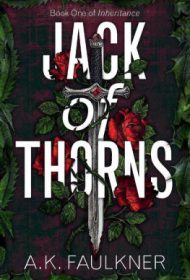 This winning male/male paranormal romance has a “happy for now” rather than “happily ever after” ending, as one might expect from the first of a series.

The story is told from the alternating viewpoints of Laurence Riley and Quentin d’Arcy, Earl of Banbury. Both are psychics of extraordinary, but unrecognized potential. Laurence can make flowers heal or grow dramatically by touching them but struggles with heroin addiction. He lives above his mother’s florist shop, “The Jack in the Green,” named after a Celtic deity, to which he prays.

Quentin, Earl of Banbury is an asexual, unaware telekinetic, who, when disturbed, particularly by sexual advances, goes into a trance and creates a whirlwind of terrifying destructive power.

Through his prayers, Laurence draws in an unnaturally green-eyed god, named Jack. “I am, very literally, the answer to all your prayers,” says the entity. But Jack has a price for his help: Laurence must keep Jack fed with regular offerings of sex. Meanwhile, Laurence has fallen desperately in love with Quentin, who will unwittingly destroy entire buildings if sexually approached. In fact, when Jack makes sexual advances towards Quentin, Quentin’s reaction brings a hurricane that wreaks havoc on the florist shop: “[E]ach and every pane of the bottle-glass windows cracked and threw lethal daggers at them.”

To survive Jack’s wrath at rejection, Laurence and Quentin must learn to control both their feelings and gifts to defeat a god.

The book contains profanity, mature themes and events that might alienate some readers. And certain moments, like Quentin’s almost complete ignorance of electronics, stretch believability. But the characters are well-developed, with quirks that make them memorable: Laurence’s self-doubt and addictive personality, Quentin’s over-the-top introversion, Jack the god’s evil side, and Laurence’s mother’s wise-woman, “you’ll know what it means when you see it.”

Written in an easy-to-read, conversational style, the story is first rate. It will keep fans of this sub-genre engaged from beginning to end.