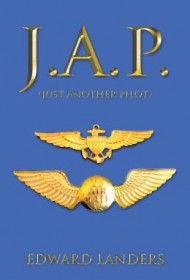 Author Edward Landers calls J.A.P. (Just Another Pilot) a novel. “Regardless of that label,” he notes in an introductory page, “the things that are presented herein are true to life and actually happened at one time or another.” The book appears to recount Landers’ real-life experiences as a U.S. Navy pilot and commercial pilot, with protagonist “Ed Kruger” acting as the author’s proxy.

The book follows Kruger through a variety of colorful interactions with fellow pilots, flight attendants and bar owners, with some interesting vignettes about what pilots have to deal with in flight. While J.A.P. has some amusing moments throughout, it can be an off-putting affair overall.

Pilots can be an arrogant bunch, as Landers makes clear, but J.A.P. is overflowing with not just arrogance but plenty of casual sexism. The female characters are almost entirely limited to flight attendants, virtually all who are characterized only as wanting to bed pilots. Referring to his wife demanding a divorce, Landers writes: “Kruger’s wife of twenty three years wanted a new life. She was tired of her old one, bought into the ‘woman’s liberation’ philosophy of the 1970s and considered that males of any stripe were duty bound to ‘keep women down and in servitude.’”

J.A.P might be appreciated by those who enjoy larger-than-life characters and pulpy narratives, but because the author makes it abundantly clear that all the events actually occurred, it may be hard for readers to create the necessary detachment to view it as such. The book isn’t helped by a host of technical errors, from missing commas to various misspellings, including referring to philosopher Friedrich Nietzsche as “Frederick Nietche.”

Then there’s the ill-advised title. “J.A.P.” might stand for “just another pilot” according to the author, but it’s also unmistakably synonymous with an ethnic slur.

The life of a military and commercial pilot is certainly interesting, but given this particular narrative’s challenges, Landers’ book may have difficulty finding an eager audience.