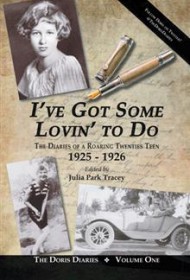 In I’ve Got Some Lovin’ To Do: The Diaries of a Roaring Twenties Teen, 1925-1926, readers are allowed to peek into the private thoughts of Doris Louise Bailey, a Portland, Oregon, teenager enjoying life in the flapper era. Doris loves boys (or hates them, depending upon her mood) and is lukewarm at best about school, skipping class when the urge strikes her. She is often ecstatic, yet easily bored. And she’s a young woman who relishes driving, socializing (on the telephone or in person) dancing and necking. To quote the book’s editor, Bailey’s great-niece, Doris was “privileged, vain, judgmental, fickle, passionate, fashionable, consumerist, horny, untamed, and very romantic.”

Doris portrays Luther R. and Willa Doris Bailey as strict parents who don’t want their daughter to have any fun in life whatsoever, going so far as to call her father “tyrannical.” To outside eyes, though, her parents seem fairly lenient. For example, when Doris took boys on a 90-mile joy ride, without permission, her parents banned her from driving for two months — and yet, ten days later, she journals, “Had car this afternoon and went over to Grant.”

Doris, overall, is a fun and fascinating person. The diary entries by themselves, though, are not enough to carry an entire book, since these two years of her life do not contain unique events of significance, and a narrative arc is missing. Had the author taken the opportunity to include supplementary content that would place Doris’s life in historical context, it would have broadened the book’s appeal, but she took advantage of that opportunity only at the start of the book.

Even so, this could be a valuable primary resource for researchers and writers and of special interest to people living in or near Portland, Oregon, as it contains a significant number of local references.