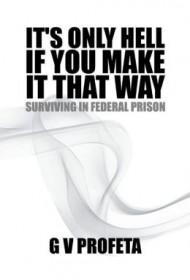 This is a self-help book nobody wants to need. G.V. Profeta details what a person needs to do to get by “behind the razor wire.” He knows the subject well, having served 53 months in three facilities in the federal prison system. His crime is never specified; readers are told he was a successful Florida businessman who “made a bad choice” and subsequently was sentenced to 61 months.

Profeta explains that he wrote the book, “so that people who have never been to prison before can pick out the good inmates from the bad and learn what is necessary to remain ‘good.’” While he offers general advice that would seem to apply outside prison walls as well (such as: “Remember to use your eyes and your ears 95 percent of the time and your mouth the other 5 percent”), most of his advice is aimed at making life livable while in custody.

Subjects include: getting a job behind bars, what each job involves and which pay the best; living in overcrowded conditions; dealing with cellmates; toilet etiquette; potential pitfalls such as gambling and TV viewing; and making friends (his advice: don’t). It appears to be smart advice from the voice of experience.

The book’s second half offers a glossary of terms a prisoner should be familiar with, a sample commissary order sheet, and a federally published prison admission and orientation handbook.

Profeta’s writing, like his advice, is straightforward. He has a good command of language and presents useful information clearly. He’s serious without being grim. One shortcoming: He planned to include some not-so-legal survival tips but says his publishing contract requires that his book “not contain illegal…material.” He does, however, provide a mailing address for readers to request the omitted material.

This book will be handy for anyone facing prison time or with a newly incarcerated family member. Even those not in that situation can learn about life behind bars through Profeta’s offering.