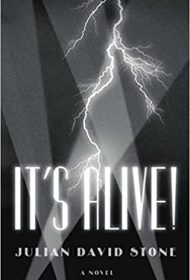 Julian David Stone takes readers behind the scenes with this winning fictional retelling of the filming of the 1931 classic Frankenstein.

It’s days before Universal Pictures’ newest movie, Frankenstein, begins shooting, and the role of the Monster is still uncertain. Since it was Junior Laemmle— with his progressive and cutthroat thinking— who insisted the company produce Dracula, which became highly successful, Junior believes he has proven himself to his father, Universal CEO Carl Laemmle, Jr. and deserves a promotion giving him full reign of production.

Meanwhile, after his success as the titular Dracula character, Bela Lugosi refuses to accept the role of a bumbling creature with minimal lines and redirects his attention to his current project. Secretly, though, he awaits just the right offer to play this Monster. The other potential lead, Boris Karloff, sees the Monster as a lost, baleful character many can identify with. He also believes this role is his chance to finally become a star and provide his family a sustainable income.

As the story evolves and characters intertwine, Junior realizes he’s not getting the expected promotion and takes too many risks trying to prove his father wrong, alienating Frankenstein’s actors, directors, and much of the crew. Things degenerate while theories fly as to why Junior is so determined to get this movie made.

Stone’s story is immediately engaging, jumping right into the heart of the action. The use of multiple viewpoints between Junior, Lugosi, and Karloff add depth and texture to the novel, while the dialogue re-creates 1930’s phrasing and cadence without going overboard. Junior’s charming, witty, external dialogue is especially fun when juxtaposed against the ever-growing anxiety of his inner thoughts.

The narrative is well-balanced, leaning neither too heavily on flashy action to drive its plot nor on ponderous character studies. Thus, it’s easy to binge-read while still offering moments of contemplation and genuine character depth.

Those who love stories about movie-making will enjoy this irresistible peek behind the curtain.