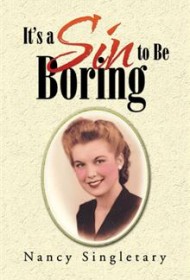 This historical biography traces a family’s struggles during the emerging 20th century Progressive movement, offering a strident political view that decries a growing “socialist track” in America. In her opening essay, author Nancy Singletary attacks this “insidious form of Communism with its big government policies and for-the-good-of -the-whole-collective lies” and describes how it touched generations of one family.

The biography centers on Rebelle, daughter of Earl and Pearl Palatine, hard-working farmers from Ohio who raise Rebelle and her siblings during the days of the Model-T, economic depression, and two world wars. Rebelle quits school to elope to New York with a young soldier despite her engagement to another man stationed overseas.

The memoir chronicles her multiple unfulfilling marriages and dysfunctional attempt at mothering Nanette, who is bounced between grandparents, aunts, and her reckless mother. They sporadically move across the country following Rebelle’s lovers or potential husbands. Nanette often grows attached to her new step-families, only to be devastated by broken promises. Yet, she remains loyal to her mother, secure in their love and embracing the unshakeable beliefs of self-reliance, the Holy Spirit, and the strong moral compass passed down from her grandparents, Earl and Pearl.

The family’s history is presented in a factual timeline that can seem cold. There is no dialogue, and the third person voice engenders little empathy for Rebelle’s struggles with philandering, abusive husbands or Nanette’s loneliness. The narrative is awkwardly interrupted by political speeches, detailed battle accounts, and history textbook-ish prose.

In inflammatory language reminiscent of the John Birch Society, Singletary blames the breakdown of family, loss of Christian values, and increased government on the rise of popular tyranny. With an undisguised bitter tone, she attempts to present a case for limited government, but her passion for liberty trumps any passion for the mostly troubled, unsympathetic characters. As a result, memoir fans aren’t likely to be satisfied by this narrative. Libertarianism proponents, however, will find much to appreciate in Singletary’s perspective.