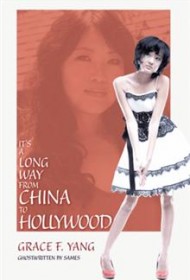 This sprawling memoir, with photos, showcases ambition and its price.

Author Grace F. Yang, born in 1964, grew up in the New Republic of China where life was difficult. At age ten, Yang’s mother asked to borrow the ten yuan Yang traditionally received on the Chinese New Year. Having money to lend made Yang feel like an adult. The idea that money equals identity, power, and meaning became her driving life force.

After the death of Chairman Mao in 1976, life became easier, and Yang trained for the Olympics in basketball. Although she did not make the cut, the training helped her get into college. She later landed an import/export job, married, and eventually had a daughter, Yvonne.

In what became a pattern in her life, Yang placed her job and child first, her husband second. For example, given the opportunity, she moved to Houston with her import/export position, leaving her husband and daughter behind in China. Yvonne eventually joined her, but her husband found another woman, and the couple divorced. Yang then married an Iranian, but also left him behind when preteen Yvonne — who she describes as “brilliant,” “adorable,” and “cute” — announced that she wanted to go to Hollywood. Yvonne began an acting, modeling, and singing career both in Hollywood and in China. Yang, too, picked up work doing music videos, commercials, modeling, voice-overs, and acting, including an appearance in 1000 Ways to Die.

Yang acknowledges her ambitions have strained both her marriages, but she seems to have no regrets. “I don’t care. You only live once,” she writes. Her story lacks the insight more serious introspection would bring. The narrative also suffers from writing errors, combining present and past tense randomly. For those who value the author’s zeal for success, her book will be read as a heartfelt near-success story; for others, it will be seen merely as an overly-dramatic, sentimental promotional tool for furthering the careers of mother and daughter.