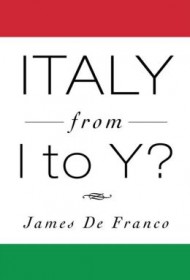 James De Franco spent his lifetime as a migrant, first as an Italian who was uprooted many times after his father abandoned the family, and then as a young man who made a new life in Australia. Now in his 70s, he looks back in Italy from I to Y? on his humble beginnings and reflects on his accomplishments as a plumber in his adopted country.

His earliest memories are crisp and tender. De Franco was born during WWII in Basilicata, the smallest and poorest region of southern Italy, and was forced to leave the family home with his mother and four siblings when his father ran off with the bookkeeper. They moved frequently before settling in northern Italy, and when De Franco turned 21, he and his mother boarded a ship to Sydney.

De Franco spends most of the book reflecting on those early experiences, mixing memories of hunger and fear with stories of childish pranks and more. He gets the reader to Australia with descriptive, entertaining anecdotes, but then loses the thread of his narrative as his chapters become less personal essay and more rhetorical debates on the topics of prejudice, politics and patriotism.

The author introduces his book humbly, explaining that he had just five years of formal education and is writing in a language he learned as an adult through correspondence courses. He asks readers to tolerate mistakes, as well as opinions he describes as “weeds,” referring to the information in the aforementioned latter chapters.

Unfortunately, these mistakes become hard to overlook as the author struggles to articulate his thoughts in a way that others will understand. “Truth resides in man’s ears,” he writes. “Sadly to each visit to the ‘old country,’ I cowardly surrender to the attacking mouth-soldiers, who ferociously defend the path and entrance to their hearing.”