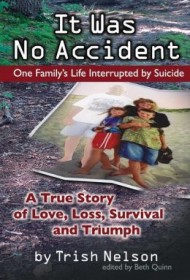 On Memorial Day 2007, Trish Nelson, a wife and mother in her mid-40s, walked into her bedroom and found her husband on the floor, dying from a self-inflicted gunshot wound. Life as she’d known it was over. In her brave, forthright memoir of learning to live through the unthinkable, Nelson chronicles the aftermath of this signal event.

Howard Nelson had long been depressed, with good reasons: a miserable childhood, a failed first marriage, a protracted battle with alcoholism, and chronic pain from two unsuccessful back surgeries. His mental health worsened along with his pain after a hit-and-run driver broadsided his truck in 2006. “He could barely drive, he couldn’t sleep, he couldn’t walk easily, he couldn’t enjoy a moment without pain,” Trish writes.

A dialysis nurse, Trish knew the value of Howard’s organs, and found donating them “a whole lot easier than getting rid of his shirts and underwear.”

The stigma of suicide weighed on her and her children, 12-year-old Trisha and 14-year-old Luke. All three felt vulnerable and exposed in their Goshen, N.Y. village of 5,500. “For the first two years, people came into our house without even knocking,” Trish writes. “My every move was scrutinized by those who loved me … and several who didn’t.”

As was her intent, her memoir reads like a primer for widows of suicides, the attendant emotions all here: anger, grief, numbness, more grief, paralysis, fear, and yet more grief. Nelson writes angry letters to her dead husband, beseeching letters to God, and, after much soul-searching, hilarious parodies of profiles for online dating services. Spoiler alert: She finds new love and remarries.

At times repetitious, the book is also uneven as the well-written narrative gives way to less compelling poetry, letters, and entries from Trish’s grief diary. Both kids weigh in, as does the family dog.

Still, Trisha’s warmth and humor shine through, making this a worthy and comforting read for others who have faced similar tragedies.