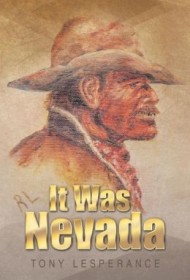 In this detailed biography, Terry Hope, a professor and agricultural expert in Nevada, recounts his life story and work to his grandson, author Tony Lesperance, during his last weeks of life.

When Dr. Tony Lesperance’s grandfather called him to his bedside a few weeks before his death, Lesperance had no idea of the journey upon which he was about to embark. His grandfather, who was dying of cancer, said that “before the pain became unbearable, he might tell [him] a story.”

The story Hope told, which became It Was Nevada, spanned nearly his entire life, and detailed Hope’s childhood, youth, and career as a professor of agriculture at the University of Nevada. From the pranks he pulled as a student, such as setting a sow loose on the dance floor during a school dance, to his role as an adult in political and military maneuverings regarding Nevada agriculture and the government’s use of the land as a weapons testing ground, It Was Nevada chronicles one man’s life with candor and obvious care.

This book is undoubtedly a work of love and devotion. The author’s connection to the subject is intimate, and his retelling of a man’s deathbed confession is dedicated to every detail. General readers may find the recollections overwhelming at times, but those with deep interest in Nevada in general, and the history of Nevada’s agriculture in particular, may appreciate the narrative’s in-depth reporting. Hope’s struggle to preserve Nevada’s livestock industry is complex and thorough to a fault. The prose reads almost as a direct transcript of Hope’s deathbed account to Lesperance.

Exhaustive detail slows the pace to a near crawl throughout much of the book, which is mammoth in size (600 pages) and could have been trimmed for greater accessibility. As it stands, it seems to be a work intended mostly for the family and friends of Terry Hope. To that end, it is a generous and rich tribute.