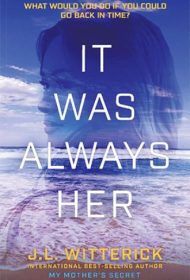 J.L. Witterick sets her second novel in the near-future United States, following 18-year-old West Point student Bruce Meyer on a mission into the past to stop a Third World War.

Chosen because of his background and perceived expendability, Bruce is given a secret letter before a hush-hush mission from General George Emmerson sends him back to 1985. His task: to protect Rachel Lee, a girl who, if she survives a school shooting, is destined to become the future first lady and whose guidance might help future President Jack Campbell avoid a terrible war. Along the way, he becomes best friends with Jack and falls for Rachel.

Despite his feelings, Bruce encourages Rachel to marry Jack, pining from the sidelines as he uses his knowledge of the future to make himself the wealthiest man alive and to help guide his friend into the Oval Office.

This conceit provides bountiful opportunities for tension, drama, and complexity. Unfortunately, these elements never materialize. The story jumps from ordinary details about high school life to the relatively mild interpersonal tension that bubbles up during Jack’s first term as president. And the focus remains heavily on the mundane: basketball practices, trips to the movies, and musings on vegetarianism, etc. The story frequently slows down to revisit scenes from multiple points of view, including a word-for-word recounting of the dialogue in some cases.

The characters are largely flat: Rachel is perfect and, thus, uninteresting; Jack is generally decent but lacks a distinctive personality; Bruce is strange and hard to relate to, his main personality trait being his slavish devotion to Rachel.

Finally, sudden time-jumps skip over major plot developments, and the text is replete with copyediting errors and factual mistakes (stating, for example, that a character who wins the Nobel physics prize at age 35 would be the youngest in history).

Ultimately, the story’s lack of action and emotional investment will leave many readers struggling to engage.