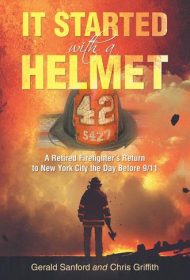 In the thousands of words written about 9/11, sometimes it’s the simplest stories that pack the most power—stories like the one Gerald Sanford recounts in this slim book.

Sanford, retired from the New York City Fire Department and living in Florida, heard about a black leather fire helmet, 100 years old, hanging in the North Naples Fire Department with the numbers “4-2” in red on the front. He knew instantly it was from the South Bronx because his former boss had once worked in the Ladder 42 fire station. “Do you think they’d want it back?” he was asked.

Of course, Sanford replied. So, he journeyed to return the helmet to New York for a special ceremony on Sept. 10. Heading home the next morning, his plane was grounded; something had happened in New York. He called a fire station in Brooklyn. “They’re all gone, Jerry!,” the sobbing voice said, “They’re all dead!”

Sanford was quickly drawn back to New York to help, first combing through the World Trade Center rubble and then with press briefings. Years later, he was diagnosed with cancer, a likely result of exposure to toxic chemicals in the wreckage.

The book opens with that diagnosis and retraces Sanford’s career, retirement, and the fateful decision to return a helmet. The tale unfolds in a casual, conversational manner. The writing is crisp, capturing a cheeky personality (“I was about 140 pounds soaking wet and probably looked more like Barney Fife than Barney Miller,” he says of his early days).

Still, his immensely profound experience feels underexplored. He writes that he doesn’t like to dwell on his 9/11 experiences. Readers, though, will be captivated and want much more than these scant 70 pages deliver, descriptively and emotionally. What did he see? How did he cope with his grief? Or anger?

As written, the book is well worth reading. But one hopes the author will soon return with a more introspective and expanded offering.