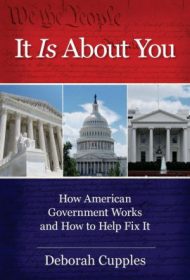 There are literally hundreds of texts available about civics and American government. So what does Deborah Cupples’ book It Is About You: How American Government Works and How to Help Fix It bring to this already glutted market? In addition to including traditional information, Cupples’ book offers a unique look at our current political problems and how to address them.

The book’s first two parts contain familiar material, couched in a staccato, point-by-point format that’s often bulleted.  Part I outlines the ideological basics of American government, including Constitutionalism, the sources of positive law, and the separation of powers. As with any survey, one can argue a point or two: for example, Cupples uses few direct quotes in her summary of the Consitution’s important provisions. (On the other hand, her discussion of statutory law admirably goes a bit beyond other texts.)

Part II discusses the three branches of American government. Again, one can quibble with an omission—only two total pages on the Executive Bureaucracy, which usually merits its own chapter.

Part III, however, is unique. Here, Cupples offers a sharp critique of American government and politics and her view on “How to Help Fix It.” Cupples’ well-developed view of the problem of “fake news” is both timely and pointed, and she includes tips for readers on how to judge the accuracy of news sources. She discusses lobbying and critiques campaign finance laws, including the Supreme Court’s decision in Citizen’s United, which gave corporations “free speech rights” equivalent to those of individuals. She also offers ideas on how readers can influence and improve government. No matter what your politics, this section lends itself to vigorous debate.

It Is About You, is a brief, largely well written primer on American government. It is distinguished by its useful section for debate, which makes the book well worth a read.