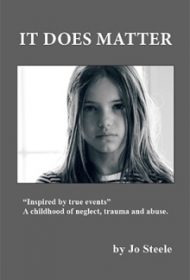 Few subjects are as upsetting to read about as child abuse. In It Does Matter author Jo Steele offers a fictional account of her protagonist’s early years that went from idyllic to nightmarish in a virtual finger-snap. It’s as harrowing as you might imagine, but hard to put down.

As the story opens, Amy and her siblings enjoy their new lakeside home and loving family. But when their parents split up, her father moves out with her brothers, and Amy and her younger sister are stuck with their mother, who rapidly descends into alcoholism and rage. Arbitrary and vicious punishments follow, and the men her mother drags home from bars begin making advances on Amy. By the time she’s a teenager, she’s essentially dead inside.

When her mother remarries, the new couple initially displays the combative drunken state the girls are used to, but Carl is wise enough to see Amy and her situation clearly, and his influence begins to improve things for the family.

While compulsively readable, the story has some flaws, including grammatical and spelling errors. In addition, the narrative reads as if it were a memoir, rather than a novel; there’s no sense of world-building, just a plain recitation of some chilling facts. (Of the first of Amy’s mother’s dates who sexually assaulted her, she writes, “Then he said the worst thing I had ever heard. ‘I will beat you and your mom to death if you scream.’”)

The story suffers from its brevity and lack of artful presentation. At a mere 54 pages, there’s little opportunity for character development and scene setting. Were Steele to expand It Does Matter and either reframe it as a memoir or commit to the character, plot, and setting demands of a novel, it could lure a large audience.

As written, readers will still find a straightforward and gripping, if truncated, account of abuse and its aftermath.