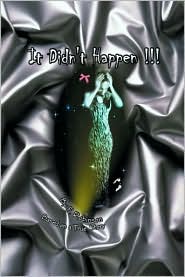 Novels based on true events can offer authors an opportunity to embellish a story to make it easier to understand. But in F. Robinson’s It Didn’t Happen!!!, it’s difficult to distinguish truth from fiction, and the result leaves readers more confused than illuminated.

The story’s protagonist, Nadege Anthony, grew up in the Roxbury neighborhood of Boston. She was slow to start dating, but her relationships quickly became a source of drama, and when things didn’t go her way, watch out: She slashed all four tires and broke the windshield of one man’s car, then considered them “even” when he yelled at her about it.

Nadege is troubled by mental illness, but even when she’s in remission her behavior is often reprehensible. She verbally abuses family members, starts a potentially slanderous website when she feels she was mistreated at a hospital and seems to find conspiracies behind every doorway. After blowing up at a family member during a court appearance, she reflects that she “didn’t like to have to use that language … ” She never considers that her conduct causes many of her problems and that she didn’t “have” to uncork verbal abuse to make a point.

On the title page the author’s name is given as Fran Robinson, and “Francine” and “Fran” turn up in the text, indicating this story may be drawn from the author’s own life. Robinson notes on the back cover that she wrote this story to warn readers about the dangers of date rape drugs, but any references to date rape in the story are fragmented and incidental to the plot. Additionally, the writing is deeply muddled. Misspellings, nonlinear chronology and an overly large cast of characters, all but one of them “bad guys,” make this book very hard to follow.

It’s clear that It Didn’t Happen!!! comes from a place of passionate belief; as written, though, it’s very hard for readers to sympathize because we simply can’t follow this disjointed train of thought.