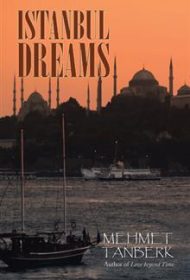 Mehmet Tanberk’s historical novel Istanbul Dreams focuses on Turkey’s shifting political and economic fortunes during the 20th century, as told through one extended family and particularly through the main protagonist Taner.

The only child of divorced parents, Taner often enjoys luxurious resort vacations with wealthy relatives and family friends, while the fortunes of his parents fluctuate with those of his country. A reunion with his grandfather, a wise spiritual sheikh, gives Taner a glimpse into his future, in which he becomes a successful finance manager for international companies. Although Taner receives an optimistic view of his future, he realizes that it will be through his own hard work that he achieves his goals.

As the plot unfolds, readers follow Taner’s life with brief mentions of school, girlfriends, vacations, interwoven with lengthy passages of history, politics and culture. Two-thirds of the way through, Taner, has a dream that seems to provide an alternate story to the life he has lived. This lengthy dream sequence is confusing and seems included only to fill pages.

The first paragraph of a novel sets the book’s tone. Unfortunately, Istanbul Dreams gets off on the wrong foot, beginning with a puzzling run-on sentence: “In the world there are surely many radiant cities [sic] But you’re the creator of ultimate beauties I called them lived the longest, in happiest fantasies…” As this snippet indicates, the narrative is extremely difficult to follow, replete with spelling, punctuation, pronoun (e.g. “her” used to refer to a male character) and syntax errors. Sentences such as, ”Nilufer realized at once what a different mansion they were,” or, “Dimitry ran house to inform their arrival” will likely thwart most readers’ efforts to discern the story.

Turkey’s rich historical and culture history and her pivotal role in world politics deserve to be known, but Istanbul Dreams requires the help of a professional editor before it can serve as the appropriate vehicle.