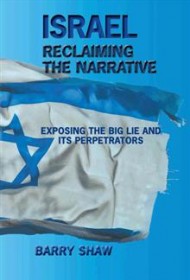 This is not a book for the faint of heart. On his website, Barry Shaw describes his politics on Israel as “Super Zionist.” Israel: Reclaiming the Narrative lives up to that self-depiction–and more.

Shaw believes that an effective case in favor of Israel, and against the Palestinians, has yet to be made. Thus, the Palestinians are winning the battle for the hearts and minds of the liberal media. In a take-no-prisoners style, Shaw offers up a host of villains responsible for this dynamic. He flogs the British BDS (“Boycotts, Divestment, and Sanctions) Movement, human rights activists, UK Prime Minister David Cameron, and even John Lennon (“his words led a naÃ¯ve world down the path of self-destruction”). Of particular interest is Shaw’s desire to set the record straight on how the media–particularly the BBC–perpetuated a false positive image of Yasir Arafat. Shaw’s heroes in this story include the American Tea Party Movement, media mogul Rupert Murdoch, Canadian Prime Minister Stephen Harper, and author Howard Jacobson–all of whom, Shaw feels, have presented the Israeli case to the public correctly.

There are noticeable problems with the physical presentation of the book, including typos and errors in chapter headers. But this is not an off-the-cuff screed. Shaw’s style is angry, but forceful. He supports his point of view with a wide tasting of media quotes; however, any source that disagrees with his point of view is immediately dismissed as wrong. Logic, then, does not reign supreme in this angry jeremiad.

This is not a work of scholarship; it is a work of advocacy. And in that light, the book succeeds. Readers, then, should take Shaw at face value, when he warns them that “If you are neutral, you have no reason to be reading this book. Put it down and buy another one.”