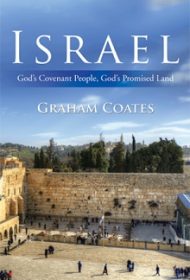 “We stand united with Israel because God loves her,” writes pastor Graham Coates. In, Israel, a work of dispensationalist theology, the author offers insights on two millennia of Christian and Jewish relations, arguing that the Church “has aided and abetted anti-Semitic attitudes and behaviors all the way back to the second century.”

Indicting Orthodox, Catholic, and Protestant Christians, the author presents hard historical evidence to support his argument, as well as disturbing doctrinal ideas that looked to persecute the Jews as enemies of Jesus. Included here are St. Paul’s mixed feelings about the Hebrews as well as Martin Luther’s shocking plan to deal with a “rejected and condemned people,” including setting fire to their schools and synagogues, destroying their homes, and expelling them from homelands. Anyone who thinks the Holocaust was an isolated event against European Jewry will see that the history of abuse runs deep and wide.

Moreover, Coates undertakes an examination of the “insidious teaching” of replacement theology, or the belief that the Jews “are no longer God’s chosen people.” Exploring both the Old and New Testaments, the author demonstrates how the Bible teaches the exact opposite, highlighting clear scriptural passages that talk of God’s everlasting and faithful promises for Israel, made to the great patriarchs like Abraham, Isaac, and Jacob. At the heart of Coates’ book is an exegesis of the prophecies of Ezekiel, which portended Israel’s fall and eventual restoration. Ultimately, Coates sees Israel’s complicated history as a movement toward ushering in Jesus’s Second Coming.

Well-versed in the Bible, with a solid knowledge of contemporary history, Coates methodically lays out his arguments and carries his line of reasoning—that Christians must do what they can to support Israel—throughout.  The book offers an easy-to-read style and follows in the footsteps of such dispensationalist writers as Alva J. McClain and Charles C. Ryrie.

Evangelical Christians, in particular, will find much to appreciate in this concise, informative work of eschatological theology.