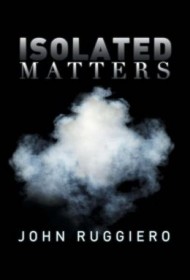 This debut suspense novel from author John Ruggiero centers on a bedridden woman trapped in a situation that grows more horrific as the story progresses.

MJ Matters, a former ballerina, suffers from a mysterious chronic illness that leaves her mostly paralyzed. Her life is not as bad as it might be: Her husband, Bernard, is a dedicated caretaker, and his brother, Alby, frequently stops by to keep her company when Bernard is at work.

But sinister things begin to happen to MJ. She has vivid nightmares about drowning and sees a sinister woman watching her. Increasingly distraught, MJ becomes convinced that this woman is Bernard’s dead first wife, Catherine. She is also troubled by the story Alby has been telling her, “Happy House of Saddened Gulls,” about a dysfunctional family that sets off to sea. The story strikes a chord with MJ, though she can’t quite figure out why.

The first part of the novel is told from MJ’s point of view. The second part, relayed through Bernard’s eyes, supplies a huge twist in the story: MJ’s life, past and present, is nothing like what she and readers have been led to believe. The novel’s third part, told from Alby’s point of view, adds yet another strange twist, revealing that Alby himself is not what he appears.

Isolated Matters is an extremely mixed bag. The plot itself is surprising, gripping and appropriately creepy – something like a cross between Jack Ketchum and Mary Higgins Clark. But the author’s writing style is a different matter. The prose is almost uniformly overwritten, even making comprehension difficult at times (e.g., “MJ believed it was now appropriate to swiftly mention her disagreement with the brothers’ gradually icing relationship”). With such a tortured narrative style, it’s unlikely that thriller readers will persevere to the end of the book, although the story itself has much potential as a work of suspense.