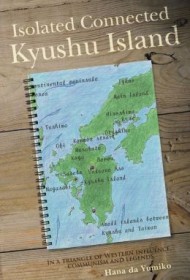 This three-generational story, based on the author’s family, traces the experiences of a Japanese family and a country emerging from the effects of WWII. Although it begins in 1945 just prior to the war’s end, the story encompasses early history, culture and mythologies of the then remote islands surrounding Japan’s mainland.

In 1945, Hisaharu is a boy hiding in a cave with his parents as the American bombers fly overhead. After one plane crashes, Hisaharu sees the dead pilot, causing him to wonder how his brother Ichiro, also a pilot, had looked when he died. A flashback briefly focuses on Ichiro: his fears about sacrificing all for his country, and his father’s fury at the politicians and media advocating war. The father’s anti-war beliefs become a vehicle for Ichiro to explain Japan’s many invaders over the centuries.

Family grief turns into a nation’s grief after the atomic bomb destroys entire cities and faith in the traditional gods. Hisaharu then experiences many changes during the American occupation, including the blackout of all references to war and patriotism in textbooks.

With no future on his father’s small farm, Hisaharu attempts to continue his education. He also enters into an arranged marriage, but his early war experiences and career in the Defense Force make him a stern, disciplined man in contrast to his young wife, a talkative, emotional woman. This creates persistent tension in the home where their only daughter, Jericho, grows up rebellious, not understanding her parents’ history and seemingly outdated views.

Although momentum lags near the end, this poignant story is an authentic tale of human resilience amidst the toppling of centuries’-old beliefs. The occasional flashes of stilted English language only lend realism to the work. Readers identify with the bewilderment at the rapid pace of change from the American occupation.

Overall, this is an intriguing book that will prove illuminating for anyone interested in the war’s impact on the Japanese people.