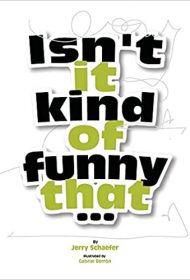 The book is a mix of elements. Some pages ask a question that takes its cue from the title, such as “Isn’t it kind of funny that…we do not take seriously someone who is smiling or laughing?” or “Isn’t it kind of foolish that…many humans spend their whole lifetime waiting for their life to start?” “Many of the questions simply point out the discrepancy between what we are and what we could be,” the author explains in the preface.

Other pages offer mini-essays, often based on the topic introduced by the question on an opposite page. The author opines on a contemporary lack of consciousness, time, death, food, war, thinking and more. Large, graphic type and whimsical drawings pepper the pages, lending the sense of a personal journal.

Schaefer offers some interesting thoughts to consider, such as when he laments our avoidance of the topic of death. “We don’t do death,” he writes, “Because we think the ending is the end. Instead of the beginning. Look at the floor of a forest where death forges an explosion of new life.”

Often, though, his essays wander, obscuring the author’s main point. And sometimes, his comments are highly debatable, as when he explains that “The objective of war is to destroy. The exact opposite of what human nature, according to its original factory settings, is designed to do.” (Anyone who has watched a baby throw a temper tantrum might question this conclusion regarding human nature.)

Also, the book lags as certain subjects repeat. For example, there are three chapters titled “Cars ‘R Us”—each discussing how a large segment of the population has perhaps become overly attached to automobiles.

In all, the book is a hit and miss read. Those willing to sift through the more questionable entries will likely find a memorable thought here and there.