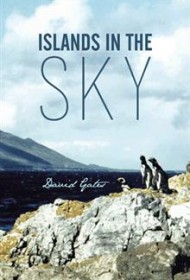 In the Preface to Islands in the Sky, author David Gates explains that the genesis of his book was conversations he has had over the years with drinking buddies, during which he’d relate stories about the three years he spent in the Falkland Islands. He has done a notable job turning those tales into an entertaining read.

In 1968, at the age of 20, Gates shipped out to the Falklands to be a teacher. He was eminently qualified for the job, he writes, “being single, male and naive.” Gates had previously worked in a bank and in a British government office, neither job preparing him for what he found in the Falklands, a group of more than 700 islands off the southern tip of South America.

Gates would travel between settlements, staying in each for two weeks. Then he’d assign enough homework to keep the students occupied until he returned. His classes might have four or five students; sometimes just one.

Being a typical 20-year-old, the author was adventurous and had a fondness for beer, making his stories even better (“I spent most weekends getting horribly drunk and doing idiotic things”). Readers learn about two brothers who were so isolated they created their own language; about David, a student who so hated school he came at Gates with a knife; about “2-nighters,” parties that were as memorable as the name implies; about Toodles the horse; about the frightful inbred cats on one island. His stories are funny, sad, and above all interesting.

Gates’ writing is conversational — it’s as if he’s regaling readers with stories in a pub – and the author displays a charming wit and a self-deprecating style. He has done an excellent job detailing a way of life now long gone.