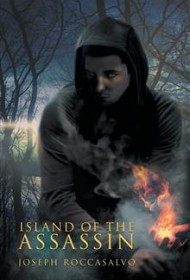 Island of the Assassin is a story of terrorism, faith and salvation—all with the backdrop plot of the adaptation of a novel for stage and screen.

On holiday in Italy, novelist and priest Peter befriends a man who, lacking a suitable heir, leaves Peter a small island and villa off the coast. Among the staff is Kai, who, when not patrolling the island on foot, is a counterterrorist assassin in the employ of the CIA. He wants to leave the job and asks Peter to help him reconcile his murderous work with God and let go of the desire to avenge his parents’ death and his own sexual abuse by terrorists.

Peter does what he can while simultaneously flying to London to collaborate on the adaptation of his bestselling novel for the stage, unaware that he’s under surveillance. When the hand-off of a flash drive containing a plot treatment for the play is mistaken for terrorist intel, Peter is kidnapped and interrogated.

While this is often an exciting story, its exuberance occasionally hampers enjoyment. The writing is often overworked, resulting in a story that sometimes feels wordy and lags in places as a result. An entire paragraph is devoted to describing a woman’s eyes, for example. At one point, Peter visits Kai and thinks, “The villa seems to come from a nonexistent future into the present and then vanish into a past already gone.”

Author Joseph Roccasalvo has a meaty, multilayered idea and can clearly evoke a place and time. The meals Peter shares with Kai are sumptuous, and the island and coast are richly described. The book would benefit, however, from more exposition on plot elements that are critical to the story and less on things that fail to advance the narrative. This has the potential to be a crackerjack thriller with a philosophical bent. As it stands, it’s still a meaty tale with an exotic setting that should draw readers in.