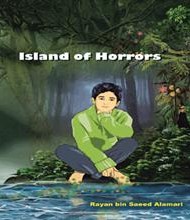 Island of Horrors is a children’s picture book that recounts how the protagonist’s fear of drowning turns into a passionate love of swimming.

As the book opens, a boy and his sister enjoy watching a torrential rainstorm from the safety of their home. But that enjoyment disappears when the boy learns that a man who could not swim drowned during the deluge. In a frightening dream that night, the boy must be rescued from an isolated island as waters rise, with his rescuer saying, “why did you not learn to swim!”

Following this, the boy is determined not just to become a swimmer but is eventually inspired to compete at the sport. The story also delivers a lesson from the swimming coach about the difference between fear that hinders and fear that inspires.

The story is told in a sweet and gentle manner that brings home its message. Unfortunately, it has several presentation problems. The most problematic is the title, which denotes a horror story rather than an inspirational sports-themed tale and is likely to attract the wrong audience. Also confusing is the author’s name; he is identified by three different names (on the cover, he’s Rayan bin Saeed Alamari; on the title page and copyright statement, Saeed Mohammed Alammari; on the author note, Rayan Saeed AL ammari). Additionally, the dialogue is not consistently broken out from narrative passages and the illustrations, while evocative, display a few inconsistencies. (For example, the coach is described as wearing “a swimming suit just like Spider-Man’s outfit,” when he’s pictured in regular swim trunks.)

Despite such missteps, the book offers a worthwhile message for pre-teen readers. As the protagonist’s fear turns into a dream of one day winning a gold medal in swimming, readers will see the bigger picture: that positive things can happen when you’re brave enough to confront your fears.