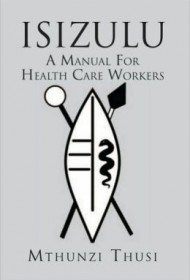 According to author Mthunzi Thusi, the most popular official language in South Africa is isiZulu. Therefore, he has compiled a resource for English-speaking medical professionals who work with this sector of the population (approximately 10 million).

The dialogues first offer the question in English, such as: “Do you have throat pain?” followed by the expected answer(s). Unfortunately, those answers are provided in isiZulu, so manual users might not understand the patient’s response if it goes beyond a simple yes or no. Some dialogues contain basic commands such as: “lift up your arms,” or information such as: “this will not hurt,” which are useful in that they don’t require a verbal response.

Although not indicated in the introductory material, the manual would be better suited to someone with a rudimentary knowledge of isiZulu, e.g., knowing vowel and consonant sounds, where to put the stress on a word, and special issues of intonation that change word meanings. As it is, there’s no pronunciation guide for the suggested dialogue. Simply indicating stress with bold face type and including an alphabetical pronunciation guide would have addressed this essential element (note: the author’s website offers audio/visual materials that address pronunciation). Also, a glossary of all isiZulu words included in the text, with their English equivalents, would have made the book more useful.

The audience for this reference book is extremely narrow and its value outside of South Africa questionable. It would seem more practical to use a translator than to rely on a phrase book that doesn’t cover the necessary elements of speaking and comprehension of the foreign language.