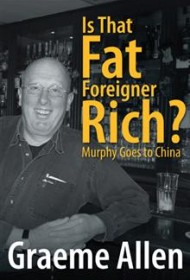 In his immensely entertaining and deftly written memoir, Graeme Allen tells a worldly wise tale of a life spent working in the tourism and hospitality trades in his native Ireland, as well as in Australia and, for the past two decades, China. In a conversational style replete with lively anecdotes, Allen explains the cultural differences he found while operating in China but also draws unexpected parallels between the Chinese and the Irish.

After four years working in his father’s textile factory near Dublin, 25-year-old Allen jumped into the hospitality field, building a small hotel in western Ireland that he ran for the next decade. He spent the following 3 years working for the Irish Tourist Board in Northern Ireland during the 1970s, when the country was in partisan religious turmoil. Then he relocated to Australia, where he promoted European travel, later moving to hotel management in Thailand and eventually China, which he fell in love with. “China reminds me of growing up in Ireland in the ’50s and ’60s. We were a country with a great historical past but a relatively new nation on the world stage, and we were trying to . . . establish our own identity.”

Allen worked at 10 hospitality companies in China before opening his own Irish pub and restaurant, The Flying Fox, in a suburb of Shanghai. Along the way, he met and married a Chinese woman who became his business partner and trusty translator and gave him insight into the cultural subtleties and quirky ethical practices he encountered among Chinese business associates and government officials.

The book’s only flaw arises late in the narrative. Chapter 28, titled “The Irish in Shanghai,” delivers a somewhat muddled 13 pages and contains a handful of typos. Otherwise, Allen’s straightforward, often humorous account of his career successes and failures is a delightful addition to business and entrepreneurial literature.