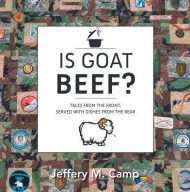 Jeffrey M. Camp is a veteran soldier with a mission. With proceeds from this unique cookbook, Camp aims to help grow the Paws for Purple Hearts organization, a therapy program that places service dogs trained by military personnel with veterans facing service-related injuries and disabilities. Along with recounting personal stories from his 32 years in the military, Camp shares 26 recipes inspired by chef friends, his grandmother, and mother.

The book is meticulously designed and well-organized. It includes a useful Table of Contents and a measurement conversion chart. Recipes, grouped by dish types (appetizers and salads, entrees, desserts, and alcoholic drinks), follow each reminiscence and include clear directions, cooking time, number of servings and a difficulty rating.

Camp’s writing is colorful and precise, albeit often (and admittedly) sexist and juvenile in focus. Stories and humor tend toward tales of rule-bending escapades and high jinx involving alcohol. Most curiously, the majority of stories fail to connect in any way to the attached featured recipe. Camp’s narrative also contains an abundance of military jargon. While he includes a Glossary of abbreviations, much of the soldier slang and terminology remain undefined.

Some of the recipes lack sophistication and seem dispensable, such as Puppy Chow (Chex Mix), or Marshmallow Cereal Treats (Rice Crispy Treats). On the other hand, a chef-inspired recipe for Paella Valenciana and Red Wine Chicken are more elegant adaptations. A Polish sauerkraut and kielbasa recipe was prompted by the author’s time spent encamped in Iraq with the Polish Air Cavalry. But in general, Camp says little about the significance of recipes or what inspired them.

Camp’s enthusiasm and heart for this project and for his comrades-in-arms comes across loud and clear and will win over many readers. He is first and foremost a soldier’s soldier. As such, his boys-will-be-boys story-filled cookbook is best suited for a military audience rather than folks looking for a fresh culinary perspective.