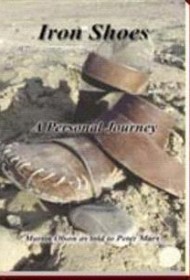 Martin Olson’s confusing narrative about events 30 years ago reads like a collection of disjointed tales, despite the assistance of novelist Peter Mars. Published in 2002 when Olson was retired, the book’s title refers to the challenges he overcame as a real estate developer who “grabbed on to anything and everything that came to my attention” and whose figurative iron shoes “have guided me and directed me and carried me.”

After a fairly conventional career developing properties for Sears, Olson in 1983 hooks up first with the shady Miami Group, which sends him (in the space of 10 pages) from Peru to Cypress to Budapest to Gibraltar to Sudan to research development projects for which he says he is never paid and which never come to fruition. Despite a McLean, Virginia, connection, “at that time, I never suspected any collusion with the CIA.”

The story gets even more cloak and dagger when Olson begins working with the mysterious Dr. Sandor Mihaly, aka “the Chairman,” said to control investments for the billion dollar Swiss Trust. He sends the author around the world to investigate development projects that, again, never get built. Looking back, Olson realizes everyone with whom he came into contact had CIA connections, and Olson was apparently a tall, distinguished, scrupulously honest but uninquisitive pawn who collected information for his handlers and enjoyed a posh expense account.

Olson’s story climaxes with his alleged discovery in 1989 that the U.S. secretly loaned Japan billions of dollars to rebuild after WW II, and the fact that Nixon allegedly erased the loans in exchange for Japan’s support of his presidential campaign. Olson and his family are repeatedly threatened with “non-existence” if he makes inquiries into the funds; this book is his effort to expose our government’s lies and deceit.

Conspiracy theorists or students of post-war reparations may find grist here, but this meandering hodge-podge of half-told stories won’t appeal to most readers.