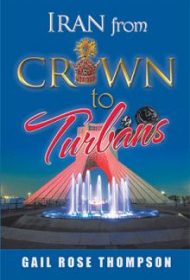 In 1972, Gail Rose Thompson and her husband Don began a five-year sojourn in Iran. Iran from Crown to Turbans is informed by her experiences there and presents an amalgam of history, gossip, social analysis, personal observation and travel information.

When the couple took up residence in Iran, Don worked as the sales manager for IRALCO, the Iranian Aluminum Company, and Gail served as trainer for the Imperial Stables of the Shah and as director of show jumping for the Royal Horse Society and the Iranian Equestrian Federation. The book covers everything from equestrian competitions to portraits of the Shah and his family, to the prevalent use of opium (and her experiments with the same), to the Ayatollah Khomeini, to the Iran-Iraq War. Thompson also includes her favorable impressions from a recent trip to Iran.

Among the many people she describes, she particularly favors Farah Diba, the Shah’s third wife who became “the patron of twenty-four educational, health, and cultural organizations.” She also spotlights Nobel Peace Prize winner, Shirin Ebadi, praising her courageous work for children’s and women’s rights. Thompson characterizes Shah Mohammad Reza Pahlavi as a benevolent dictator who wanted “the best for his country” but was too spoiled and insulated to seriously recognize and address the inefficiency and corruption in his government.

Thompson’s writing is chatty and chockful of lively anecdotes. The narrative, however, sometimes veers off-course with tangential stories, such when she embarks on a discussion of the country’s press, only to detour to a lengthy sidebar about a sly public relations man. Additionally, Thompson writes pages describing elegant parties but only briefly mentions how SAVAK, “the Shah’s security organization,” arrested her housekeeper as she prayed at a mosque. She also omits sources for her statistics concerning death tolls during the anti-Shah movement, the Iran-Iraq War, and other issues.

Despite these flaws, Thompson’s book provides an animated, fluid gestalt of all things Iran. It should appeal to readers interested in the country.