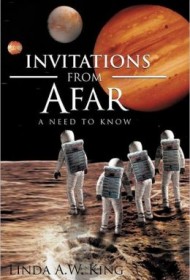 Exploration and espionage collide in Invitations From Afar, a sci-fi adventure that attempts to contrast the excitement of alien contact with the deep-seated fears it provokes.

Returning from a secret mission to explore life on one of Jupiter’s moons, the crew of Copernicus has come under attack: A bomb is set to collide with them and they have just over 24 hours to find a way for themselves – and their discovery – to survive.

Crew member Jana Novacek is already under enough pressure. As NASA’s youngest astronaut, her critics have expressed doubts about her assignment. Was she assigned to Copernicus because of her secretive Commander, a long-time family friend? Or is it because of her crewmate, a foreign prince with a special interest in her? And just what did they discover together that would provoke this act of terrorism?

The answers come when, in a bid for help, Jana reads her personal journal from their journey over an open broadcast to anyone on Earth who might offer help.

Beneath the surface, Invitations From Afar is a techno-thriller, steeped in political calculations and professional rivalries. This is a provocative structure for a novel, but the intrigue is diminished by too many background characters and sluggish pacing. The level of detail is admirable, and often interesting, but the dialogue is exhaustive — and ultimately exhausting. The plot unfolds without urgency, and the lengthy narrative overstays its welcome.

Although most of Invitations From Afar is composed as Jana’s journal, that doesn’t help us understand her emotions and reactions. Other characters feel similarly incomplete or unbelievable. They face near-certain death with unlikely practicality, and they adjust almost immediately to the earth-shattering implications of their discovery. Readers may be forgiven for feeling underwhelmed by the events of the novel; after all, the characters act as if they feel the same way.