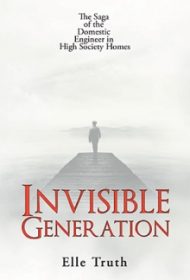 In a novel “…inspired by the true facts of working for 30 years as a cleaning lady,” Elle Truth offers a bizarre, highly controversial take on a Stepford Wives-esque community that culminates in a grotesque political satire.

The book’s narrator is an omnisexual house cleaner named Alice who is in a semi-permanent relationship with her partner, Nelly. But there’s little house cleaning going on here; instead, the story is punctuated with graphic depictions of multifarious sex acts and some drug use. The author populates this community with well-to-do couples, often called by monikers like “Dr. and Mrs. Gossip,” whose respectable surface appearances belie sordid, unfathomable behavior.

Alice’s troubles start when she succumbs to the sexual advances of Ann Schiller, who is married to an abusive cross-dressing doctor. For this transgression, Alice finds herself the target of the “Euyro Club,” a worldwide cabal of Caucasian men committed to white power. Under constant surveillance (or so she thinks), both Alice and Nelly are subjected to ongoing harassment.

This drama culminates, abruptly and with no real connection to the plot heretofore, in a thinly-veiled portrayal of a presidential election during which “Ronald Dump,” a clownish, bullying thug, defeats “Billiary” with help from his Russian friend, President “Glad Pussy.” Alice worries for a country on the brink of war even as the president and Euyro Club suppress and torture women and people of color.

It’s a garish denouement for a deeply transgressive, troubling story. Even with Alice’s paranoia, lewd behavior and personal drama, her voice is far from authentic. And as graphic as the narrative is, it has the unreal feel of someone who had researched their book by watching violent pornography. It also never really ends—it just stops with a shocking, violent conclusion that leaves plot threads unresolved.

Experimental readers may find something of value here, but those who are sensitive and/or conservative would do best to avoid this strange, sexually graphic tale of resentment and revenge.