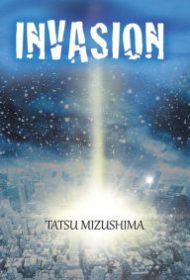 Tatsu Mizushima’s Invasion is a contemporary science fiction novel that includes superheroes, shapeshifting aliens and a hint of romance.

The story begins as Olivia and Takashi awaken in a city filled with sleeping people to discover they’ve lost their memories and have newly acquired superpowers. Not only that, but the city is being attacked by an army (possibly American) and “alien creatures” from space. Many questions arise: Why is the city—eventually revealed to be Moscow—being attacked? How did Olivia and Takashi end up in the right place to get their powers? Why has the human army killed all of the citizens (it turns out they aren’t sleeping after all)? Exactly what are the aliens after?

Unfortunately, most questions are never answered. Eventually, the author provides some backstory for Olivia and Takashi, who begin to remember that they were romantically involved, but the narrative is largely puzzling. Tenses shift from the present to past without warning, sometimes in the same paragraph, making readers uncertain whether something happened before or after the alien invasion. And the story never explains the motivations of the amoral human army or why two invasions are happening concurrently.

Readers will also find the dialogue problematic. Olivia and Takashi frequently “chuckle” at inappropriate times, often respond to attacks by saying, “Aaarrggghhh!” and end many sentences with, ”ha, ha” or “ha, ha, ha,” even when nothing funny has happened.

While battles with the “alien creatures” are vividly drawn, they are derivative of many science fiction works, specifically Orson Scott Card’s Ender’s Game series. And the many skirmishes soon become redundant.

Perhaps concentrating on one invading force, rather than two, would have made Invasion more readable. The mysterious human army disappears from the plot after the first half anyway, so that Olivia, Takashi and a few surviving Russian soldiers can concentrate on the creatures.

As it stands, Invasion is a confusing read, one that offers little that’s fresh for fans of the genre.