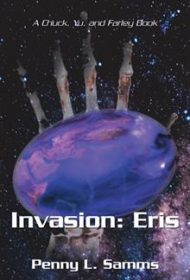 The second installment in author Penny L. Samms’ Chuck, Yu, and Farley series, Invasion: Eris, takes place hundreds of years into the future and sets its action in spaceships, alternate dimensions, and on colonized planets and alien worlds.

The story begins where the first book seems to have left off, with teenager Chuck Holloway, his friends and the whole human race facing an existentialist threat. Chuck is part of a team looking for revenge on alien invaders already on the offensive against Earth. Along with friends Farley and Yu, as well as his grandmother “Grammy,” Chuck is struggling to figure out how to effectively battle an enemy bent on epic destruction.

Their investment in the struggle is personal: The book opens at the funeral of Nathan, a friend who died battling the aliens in book one. Just as Chuck and his friends start drawing up a battle plan against the aliens, the safety of their base on the alien planet of Eris is compromised. Their battle for survival brings them to alien worlds and alternate dimensions, and their only chance of survival comes in an unlikely ally.

Samms offers a narrative full of exciting, fast-paced action sequences, colorful characters and otherworldly settings and circumstances. These elements don’t always fully succeed, however, due to frequent stretches of lackluster and awkward prose (“Despite it being a funeral, and one for such a young person, the audience, already standing, gave a thunderous ovation”). Additionally, series newcomers may be disoriented by story’s rapid progress. We don’t have time, for example, to build rapport with Chuck and the rest of the main characters before the intergalactic action kicks up in earnest.

Even so, that action is plentiful, and the story offers an imaginative take on the science-fiction genre. While Samms’ writing may be a bit too clunky for seasoned readers of Asimov or Heinlein, for example, it may satisfy adolescents new to the genre.