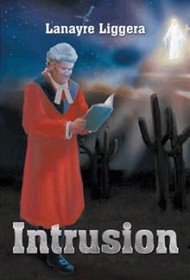 An English barrister meets the widow of an old friend, leading to adventure and romance in this international, Christian-themed tale.

After serving as judge in a case involving an oil-theft ring whose members have vowed to seek vengeance against him, Sir Carter Braxton lives a shadowy existence in London, protected from his enemies by the mysterious Sidi El-Hassam. The barrister’s life changes dramatically, however, when Valerie Falconer, the Texas widow of an old university friend, finds herself in London and discovers how Braxton has been living.

Backed by her wealthy Texas relatives, Valerie convinces the Sidi to transfer Braxton to her family’s ranch. The Sidi agrees, believing this may allow him to flush out and eradicate members of the oil-theft ring.

After the Sidi’s team dispatches his enemy, Braxton is free to marry Valerie, after first being baptized in her fundamentalist Christian faith. The couple returns to England to occupy Pendragon, Valerie’s mansion, and the Sidi departs on a mystical quest.

Initially, Lanayre Liggera seems to have a scintillating plot on the boil: Sophisticated Englishman moves to Texas cattle ranch, foils international meanies and wins fair lady. Sadly, though, her novel is notably flawed.

After carefully building suspense in the first third of the book, Liggera tidies up all plot threads with merely a few words (“Suddenly, a phone call informed them…”). The major peril Braxton faces is eliminated so easily it appears to have been almost insignificant, while much space is devoted to peripheral events with thin pretext: an ad hoc exorcism and a religious rant stridently delivered by Valerie to a high school assembly; fundamentalist Christian dogma begins to predominate, and the story grows tiresome.

Throughout, quotation marks are routinely absent, especially in lengthy monologues (there are many), making it difficult to discern who, if anyone, is speaking.

Ultimately, Intrusion doesn’t live up to its promise. Burdened by many confusing diversions, pat solutions and religious dogma, it’s unlikely to find a wide audience.