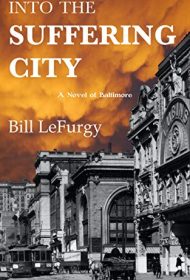 Into the Suffering City offers an intriguing fictional glimpse into 1909 Baltimore as a mystery threatens to topple the city’s leaders.

When a prostitute is killed, a detective agency representing the chief suspect, a mayoral candidate, hires pathologist Sarah Kennecott to observe the victim’s autopsy. Generally deemed brilliant but peculiar due to her difficulties communicating her feelings and interpreting others’ emotions, Sarah’s autistic characteristics are not understood in an era when the concept of the disability didn’t exist. Lambasted by the police commissioner as “a spastic little freak who’s been overeducated beyond any practical use,” she remains determined to pursue the evidence.

Meanwhile, Jack Harden, an army veteran and private eye with a large gambling debt and post-traumatic stress syndrome, is also investigating the crime. Soon, Sarah and Jack cross paths and team up to solve the mystery, one that widens when another murder occurs. As they close in on the truth, their own vulnerabilities threaten to derail the investigation.

Bill LeFurgy seamlessly weaves culture, history, and mystery into this novel’s surprising twists and complex characters. As Sarah and Jack travel among Baltimore’s gritty warehouses and gilded mansions, the author highlights the contrasts of a city that sits at the border of North and South and at the crossroads of the past and future. Despite a “current of change,” corruption greases the city’s political wheels, and racism persists in a state that forbids interracial marriage.

A professional historian and archivist, LeFurgy deftly raises issues of mental health, sexism, and racism without detracting from the action. Such themes provide a more nuanced look at society and culture in Baltimore, then the country’s seventh largest city. While the story is fictional, LeFurgy describes his thorough research at book’s end.

Clear prose, intricate plotting, and likable leading characters combine to form an engrossing mystery that could easily serve as an initial title in a series.

BlueInk Heads-Up: Baltimore readers will especially enjoy this edifying look at the city’s past.