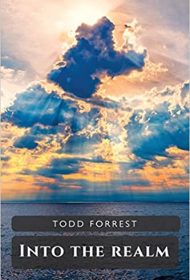 Todd Forrest’s Into the Realm is a murder mystery set on Cape Cod.

Forrest is a seventh-generation Cape Codder who apparently lives the credo “write what you know”: His novel is about Cape Cod’s land and people. The author is also a former commercial fisherman, and the story is deeply immersed in the life and culture of fishing and sailing. Probably not coincidentally, the story’s protagonist is named “Caleb Forrest.”

This book delivers an epic storyline, beginning when John Hancock was governor of Massachusetts and the Forrest family settled on land gifted by him. Caleb’s ancestors were sailors and fishermen, and his “Gramp” still lives on family land. Caleb once lived with him but left after a mysterious murder. Now, he’s finally back.

The plot veers between his return as the last heir of the land and his adventures growing up in the area. Additionally, it concerns a wealthy town politician and builder, whose son is a childhood friend of Caleb’s and who is scheming to develop the Forrests’ land.

The story is elegantly written, with strikingly evocative passages like this: “Cool bottom muck oozes between my toes as I trudge along waist-deep, creating a swirling cloud of rust-colored sediment in my wake. Darting schools of silver alewives race about my knees…”

But the novel is also a head-scratcher. The murder is hinted at but not explained until late in the narrative. Meanwhile, the prose jumps back and forth in time without much transition, and Forrest often warps his verb tenses. This might be purposeful, but it adds to the disorientation.

Finally, although the author has deep knowledge about the area, and about fishing and sailing, he details so many technical aspects of Cape Cod life that landlubbers might feel overwhelmed.

Some readers will feel that the story is too long and the details too many. Patient readers, however, will find a tale of guilt, grief, and redemption with much to recommend it.