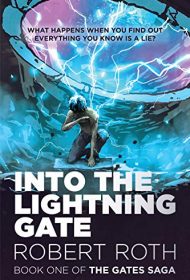 Although 26-year-old Cameron Maddock believes himself to be utterly normal, he quickly discovers hidden abilities when mysterious villains break into his home and begin tracking him through modern San Francisco and beyond. His newfound skills include enhanced reflexes, an uncanny sense for danger, and the ability to open an interdimensional portal when he’s feeling threatened. Beyond one of these portals, Cam and his best friend Tony are rescued—and then abducted—by Tasha and Finn, agents of the Protectorate, an organization that monitors and secures these portals from their home base on an alternate Earth.

With the agents’ help and protection, Cam begins to learn more about the wetware embedded in his brain that allows for his superhuman feats, and when Tony is abducted by a mysterious agent who has been pursuing them, Cam immediately gets to work mastering his abilities so he can conduct a rescue.

Roth does a masterful job doling out details on the technology and alternate universes without becoming frustratingly coy or excessively info-dumping—all while keeping the world-building internally consistent and clear. Unfortunately, his descriptions of action sequences sometimes seem clinical, slowing momentum rather than generating the intended excitement. The dialogue, likewise, tends more toward formality and function than crispness and wit, which is appropriate for some characters but not all.

Interestingly, Roth introduces new characters as “they” or by descriptors, rather than “he” or “she,” until their gender is actively affirmed by either that character or someone who knows them. This is done in a non-intrusive, respectful way that doesn’t impede comprehension.

Despite its flaws, the story’s mysteries surrounding Cam’s abilities and the people who are after him keep readers turning pages. Those who enjoy science fiction thrillers will appreciate the plot’s steady pace and the seemingly invincible villain’s relentless pursuit of the protagonists across worlds.