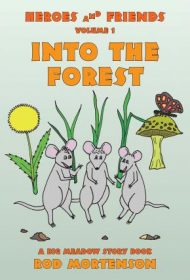 Three mice venture into the woods in Rod Mortenson’s children’s book Heroes and Friends, Volume 1: Into the Forest.

Curly, Spike, and Squeeky are friends who live in the Big Meadow. One hot day, Spike decides to head through the woods and to the pond to cool off. Curly and Squeeky tag along, and on the way the three navigate minor disagreements, owl and fox territory, and a giant log that blocks their path. The book ends with a clliffhanger as they move on from the log, with danger “just a few moments away!”

Mortenson is skilled at world-building and even includes a map of the Big Meadow to help readers better visualize the story’s setting. Characterization is strong, and each mouse’s personality is revealed: Spike’s grumpiness, but also his softer side; Squeeky’s well-intentioned but annoying chatter. Even contrasts between the mice’s home lives are detailed and distinct, with Spike an only child and Curly one of 12 brothers and sisters.

The ending, however, is disappointing. After the mice use teamwork to solve the problem of the fallen log, it seems like events are about to kick into high gear. Instead, the narrative ends suddenly. While the story apparently continues in a sequel, readers will feel let down by the lack of a resolution here.

The text is suited to a first and second grade audience: challenging but not overly complex. The hand-drawn illustrations are charming, but there are only a handful, leaving many pages dense with text. Additionally, the book’s design places most illustrations at the beginning of a chapter, sometimes on the right-hand page; this results in an awkward pairing of illustration and text, such as when a left-hand page ends with, “And into the forest they went…” but the facing page shows a fallen log blocking the mice’s path.

Into the Forest delivers an intriguing beginning to a multi-volume story, but some revision would greatly improve its appeal to young readers.