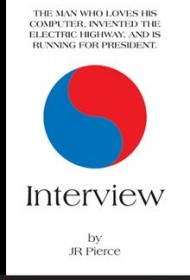 When J.R. Pierce published Interview four years ago, the United States was in the midst of transitioning to the presidency of Barack Obama. Because of his ethnicity and unusual path to politics, Obama would have seemed unelectable in the not-so-distant past. His election gave politics an air of unreality, a quality that permeates Pierce’s unusual combination of diatribe/satire/philosophical tract, presented in the form of a 345-page fictional conversation-cum-interview between journalist Lily Marlene and presidential candidate H. Boots Johnson.

The book is set in the future; Johnson hopes to become president in the 2020 national election. Pierce provides no context for readers, beyond the opening announcement by Marlene that Johnson is a “maverick mover and shaker of contemporary America… who invented and patented all essential technology for the electronic highway in 2010” and has since been a “dominant force in global life.”

Marlene fancies herself a tough interviewer, and Johnson appears to play along with her perception of herself, seeming to compliment her on her aggressiveness. Throughout, it’s difficult to discern if Johnson is earnest, evasive, goofy or perhaps something else, due to the interview format, which doesn’t allow for a narrator’s interpretation of events. Johnson’s answers are not always responsive to Marlene’s questions; even when they appear to be responsive, the words do not always track. Is Johnson spouting nonsense? Is he a con man? Is he so futuristic that a mere mortal stuck in the era before the book’s setting is hopelessly out of touch?

These unanswered questions make for a puzzling and frustrating read. The difficulty of the text is exacerbated by proofreading and sentence-construction weaknesses.

Surely some readers will find the disjointed question-and-answer text some combination of clever and deep–-perhaps a recognizable variation of post-modernism. But most are more likely to find it too challenging to navigate and will give up on this Interview long before the 2020 election.