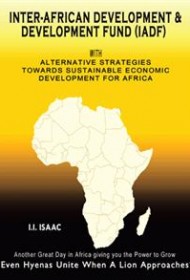 The problems facing the continent of Africa are well documented in the literature. I.I. Isaac, an independent researcher, plunged into this literature in 2009 with verve. The result is a detailed two-volume study (Volume 1 reviewed here) of the economic and social issues facing 21st century Africa.

Isaac concludes that the key crisis facing Africa is a “monopolization of resources” by the West. He offers a plethora of data to support his claim. He looks at the issue of land use, macroeconomic issues, currency and banking, trade, and public health, particularly HIV/AIDS. His solution to the problems he documents is the forming of “federations” within Africa to join together to resist resource monopolization. He further suggests that this be accomplished through an Inter-African Development Fund (IADF), an idea broached in 2001 by Nelson Mandela as an alternative to the–according to the author–flawed contributions of the International Monetary Fund. The IADF, still a theoretical construct as of the writing of this book, is described by Isaac as “an array of capital intensive development strategies for African development by African governments and private sectors.”

This book is not written for the casual reader. Approached in the manner one expects from a doctoral dissertation, Isaac’s prose is often dense, and the heavily cited work makes liberal use of charts, graphs, acronyms, and lengthy extracted quotes. It also suffers from problems of format, particularly a propensity to suddenly shift from double-spaced text to single spaced text. But Isaac presents an organized argument in favor of the establishment of an IADF. And while his writing lacks discipline, there are moments of passion; indeed, all readers would benefit from his all-too-brief discussion of child soldiers in Africa.