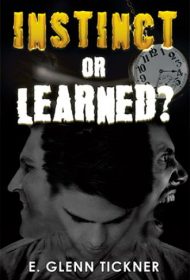 In this densely plotted psychological thriller, author E. Glenn Tickner creates a unique psychiatric condition and a hypothesis regarding specific details of the assassination of John F. Kennedy, including who arranged the murder.

On April 19, 1995, Erick Anderson, a young married man, watches in horror as the Murrah Federal Building in Oklahoma City tragically falls with his beloved sister and nephew inside. Six weeks later, Erick meets with psychiatrist Jacob Gottlieb, who discovers that due to the trauma, another person is inhabiting Erick’s brain. But unlike a case of multiple personality disorder, Gottlieb determines that a separate and unique person, unrelated to Erick in any way, is trying to take over Erick’s body—and he’s dangerous.

As Gottlieb continues to treat Erick, he’s able to make direct contact with this entity, and the historical information the entity provides is astonishing. Gottlieb goes to extraordinary lengths to fact check the revelations, placing all associated with the case in danger. Ultimately, however, the only way to help his patient is an experimental surgery, and there are no guarantees that Erick will emerge as the person he once was. Further, Gottlieb and Erick’s wife have begun an affair.

Despite the fascinating premises, the story has problems. The author introduces a second person inhabiting Erik’s body, but that persona is virtually abandoned as the story evolves. A plethora of professionals are involved in the case who all sound alike, making them difficult to distinguish. And much of the dialogue is stilted; for example: “Wow, Sophia, what a story. You are a brave and lucky lady.” More frequent use of contractions might have lightened the weight considerably.

Finally, the conclusion is shocking and unsatisfying, as if the author simply ran out of steam by book’s end.

Some readers might persevere through the story due to the prospect of tantalizing historical possibilities, but the novel requires revision to achieve wider appeal.