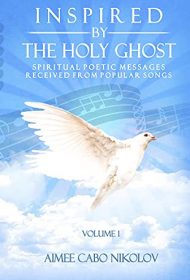 The poems follow simple rhyme schemes. Each bears the title of a popular song and the names of the artist(s) who performed it. The speaker in the poems then translates the songs’ typically secular content into a religious message for readers.

Nikolov, who hosts The Cure radio talk show, explains her approach in the Preface: “I always found music therapeutic and discovered great meaning from songs… As I grew in my relationship with God these meanings started to form into poetic messages that would follow the one minute of the song that was played on the radio show.”

“‘Something Just Like This’ by Chainsmokers & Coldplay” illustrates Nikolov’s concept and style. She writes: “God watches us so tenderly/ he wanted something just like this,/ a love willing to die for/ people he can miss.” Throughout, Nikolov reiterates this essential message with minor variations in diction, meter, and rhyme, and the musical conceit is simply a launching pad for the religious content without any further import.

While the collection’s organizing principle is clear and consistent, the content grows quickly repetitive as the speaker continually explains God’s care for and commitment to humanity. Rather than evoking these ideas through sensory language and vivid examples, the poems are replete with abstract words such as “truth,” “love” and “joy,” (“His truth lives on/ his love is incredible, he is our boo,/ The example he left us/ brings us joy and makes us new”). As such, they are devoid of concrete and evocative details that would allow readers an emotional port of entry to the poems.

Although the poems in Inspired by the Holy Ghost lack strong literary merit, they might be enjoyed by habitual readers of light, religious verse.