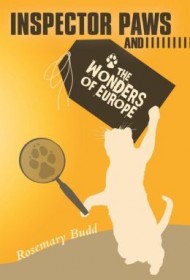 Rosemary Budd’s new addition to the subgenre of cat-narrated mysteries introduces a wise and wisecracking cat called “Inspector Paws,” whose spunk and personality easily carry a narrative that careens (sometimes literally) all over Europe.

In this debut novel, the former alley cat Inspector Paws is just getting accustomed to snuggling in with owners Stella and Ernie when the latter dies of a heart attack. While humans attribute the death to natural causes, Paws smells foul play and is determined to get to the truth of the matter. Meanwhile, Stella and her friend Jo take the cat with them on a bus tour of Europe.

A zany — and suspicious — cast of characters stumbles through a comedy of errors as the bus tour proceeds. But the real fun in this mystery comes through the commentary of a cat who takes a wry view of humankind and who often pities people for lacking cat instincts. Luckily for them, Paws possesses a cat’s keen sensory skills as he schemes to keep Stella and Jo out of harm’s way while he escapes plenty of threats to his own safety.

This is a genre in which it is all too easy to stray into the cloyingly cute, but Budd’s adept pacing and the cleverness of the cat’s monologue keep this novel on track. Some of the human characters are drawn with a heavy hand, but this is acceptable when, as is the case here, the intent to make them caricatures is clear.

Budd’s book has a lot to live up to in a field where lively and well-loved characters abound. The good news for fans of feline sleuths is that Inspector Paws and the Wonders of Europe holds its own and then some in the cat caper tradition.

Highly recommended for fans of the Midnight Louie series by Carole Nelson Douglas.