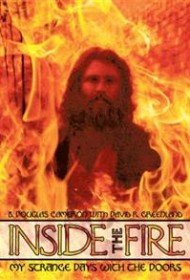 Inside the Fire at first seems different from the dozens of hagiographies and psychobabble bios written about the Doors and the group’s mystical lead singer, Jim Morrison. It’s viewed from the perspective of a young fan, author Douglas Cameron, who falls into the gig of his life as assistant road manager for his favorite group.

The first chapters are a snapshot of Cameron’s teenage life in the late ‘60s, until he takes a bus from Rockford, Illinois, to a Doors show in Chicago. He gets inside the hall and meets the road manager, who puts him to work setting up equipment. The road manager then sends a series of letters (reproduced here) to Cameron and his father urging the teenager to focus on his studies his senior year before he’ll hire the kid.

The story reaches its climax early, when Cameron heads to L.A. in the summer of 1969 to work for his heroes. While there are some colorful stories along the way, Cameron barely gets to know Jim Morrison, who turns out to be – surprise – a jerk. The road manager turns out to be gay and interested in Cameron, but the young roadie resists. Then, 17 days – 60 pages into the book — after a few shows and a gig in Mexico, Cameron quits.

It’s all denouement from there. Cameron follows the band’s career and Morrison’s death from afar, staying in occasional touch with the remaining members. He becomes a musician himself in a series of club bands before settling down to teach history.

Although the book starts out promisingly, the brevity of the time spent “Inside the Fire” sucks the energy out of the rest of the book. It drags on with photos and life after the Doors for another 60 pages. A transcription of a 1984 radio show on which Cameron was a guest along with Ray Manzarek takes up 24 pages at the end. The result is a book for Doors fanatics only.