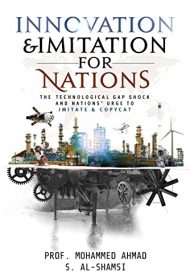 Al-Shamsi first writes about the economic motives for innovation, positing that developing countries don’t have the infrastructure to innovate, and hence must “copy” from developed nations. He then offers historical accounts of innovation that was “stolen” from one country by another throughout history, for example, Chinese silk and “Greek fire” violet dye.

The author also addresses policy issues, noting that countries should encourage citizens to innovate. They should also offer state protection for their citizens’ inventions, as when work can be copied by others without penalty, innovators lose their motivation. Reliance on foreign innovation, he adds, stifles local creation (as foreign innovation is often subsidized).

Finally, he discusses economic theories on innovation. However, the main work of many of the economists cited—including David Ricardo, Raymond Vernon, and Paul Krugman—isn’t in this sphere, leaving the author to merely hypothesize about their stances.

To have a meaningful discussion of the topic, it’s important to differentiate among the various types of innovations. For instance, while swapping one material for another can improve performance of a product, creating something entirely new, such as a new musical genre, is arguably a truer innovation. While the text seems to understand these distinctions intuitively, it equivocally shifts between private and governmental considerations and overlooks other important concerns, such as multinational organizations operating within a country’s borders, conditions attached to foreign aid, and talent migration.

Additionally, studies the author cites don’t always support the claims he makes (such as the idea that developing countries don’t have the infrastructure for innovation). Often, citations are missing altogether, and sometimes, the author states a question but fails to answer it or conflates issues.

As a result, while the book might attract readers interested in innovation, it first requires revision to address the issues mentioned.