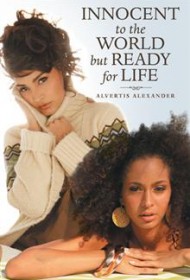 Samantha Butts moves beyond a challenging childhood to attain success in Alvertis Alexander’s novel Innocent to the World but Ready for Life.

Samantha, the adopted daughter of narcissistic Claude and Scarlett Butts, experiences little affection from her parents growing up. As such, she becomes close to her nanny, Rosemary, who watches her while her parents are frequently gone due to work. Not long after Claude and Scarlett die during a trip to Paris, Rosemary tells Samantha her parents were criminals involved in everything from kidnapping to bank robbery, and their deaths were no accident. Samantha, now a teenager, is left with this knowledge, numerous unpaid bills and a big house headed toward foreclosure. Because of her financial situation, Samantha takes a job as an office assistant.

In college, she gets another job at a nightclub with a gentleman’s club next door. Before long, Samantha is stripping to get herself through college. There she meets the mysterious Franco, a wealthy, older man who befriends Samantha and her best friend and co-worker, Armani. Franco surprises the women with exotic trips to the Holy Land and Africa, while harboring a secret that will ultimately change Samantha’s life.

In the opening pages, Alexander’s poetry background is evident through her strong, vibrant language. However, the story and writing quickly lose strength. Despite her parents’ ambivalence and nefarious ways, Samantha seems barely affected by any of it. Additional characters, particularly Rosemary and Armani, are underdeveloped, and the story offers little depth since Samantha’s struggles are nearly nonexistent. Alexander also uses informal language in her prose (“OMG,” “shiznit,” etc.), which can be offputting. The text includes mistakes with punctuation, misused words (e.g. “sorted” instead of “sordid”) and the inconsistent spelling of Claude (which also appears as “Claud”).

Alexander’s story is supposed to chronicle a young woman’s fall and her rise into adulthood. Unfortunately, the weak plot and poor editing result in Samantha’s rise falling flat and, ultimately, deliver a disappointing read.