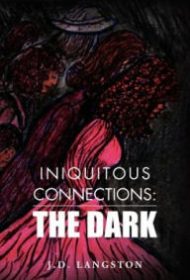 In J.D. Langston’s novel Iniquitous Connections: The Dark, a WWII Army medic’s troubles on the homefront cause a chain of events that impact his two young daughters, who then struggle to make sense of their fractured lives.

Craig Lewis suffers from PTSD, manic depression, and alcoholism. His wife’s agonizing death from a tainted amphetamine injection he issued to suppress her appetite sends him over the edge. Amidst this tragedy, Craig becomes physically abusive toward his daughter Karen Ann, and in a drunken rage, he sees the resemblance of his younger daughter Susie to his late wife, and soon sexual abuse occurs.

In five parts, this voluminous novel covers the1940s to the present. Langston details the highs and lows for these two sisters, as the early trauma affects their emotional well-being. For Susie in particular, the road to recovery becomes long and ominous as she fights depression and other mental challenges. Langston also weaves in the concept of God and prayer as a path to salvation. Beyond traditional treatments, Susie’s therapist often directs her toward the healing strength of the Divine.

A solid character-driven novel, the story moves at a steady pace, and Langston skillfully injects period details, from television’s Laugh-In, to the moon landing to the new Lamaze childbirth method.

Langston’s narrative style often forewarns readers of things to come. While this might seem a spoiler, it also creates anticipation for the impending drama. And while Karen Ann’s absence is felt as the author focuses on Susie in the latter part of this work, Langston recovers from this by introducing both sisters to a neighbor character who shares her own traumatic experience.

The author’s opining epilogue covering war and its consequences seems a momentary disconnect from the novel’s flow but succeeds to remind readers that perhaps the best way through dark times is to connect with a Higher Power. Overall, those drawn to in-depth family sagas should find Iniquitous Connections an interesting and compelling read.