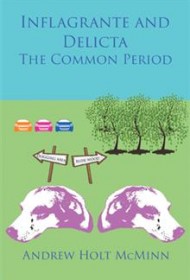 Toss Armistead Maupin’s Tales of the City into a blender with a pinch of Ken Kesey and a dash of Dr. Seuss — and don’t forget to liberally garnish with magic realism — and you’ll have something very much like Andrew Holt McMinn’s Inflagrante and Delicta: the Common Period.

Maupin gave us San Francisco’s 28 Barbary Lane and its eccentric characters. McMinn counters with No. 69 SW12 London, a middle class borough that nonetheless has a home big enough to accommodate seven adults and two dogs, most with their own suites.

The home’s two female dogs are central here, since one—Inflagrante—narrates the story, a telling that begins when she is still a sperm inside her daddy. Nonetheless, she and her lisping sister Delicta bear witness to No. 69’s colorful characters: Scudders, a hulking South African with a deformed claw hand; Humpy and Dumpy, the gay landlords who operate a successful party planning business; Auntie Basil and Uncle Molly, conjoined twins separated as adults, yet reassembled with each other’s arms and legs; and Jemima, a transvestite sexaholic. There’s also the butler Bunter, who skulks around like a villain in a Sherlock Holmes novel.

Inflagrante and Delicta could give your grandmother’s Electric Kool-Aid Acid Test a run for its money for its surreal goings-on. Its bizarre narrative is rife with wry humor and emotional dissonance. Did we forget to mention that the dogs are anthropomorphic and can talk to their human companions, not to mention their own internal organs?

McMinn litters his novel with British phrases that might stump American readers and the story feels padded in places. Also, the overarching theme that even broken people can make a home isn’t particularly new.

Still, you find yourself drawn to this warm, crackpot tale — one sure to reward liberal-minded readers who enjoy a high dose of camp.