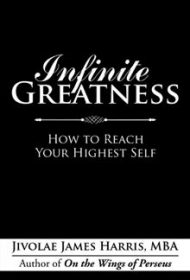 Harris had many accomplishments to his name, including academic success in his teen and college years and the launch of his own personnel company. But before finishing his PhD coursework, he was diagnosed with a disease he describes only as “fatal.” To weather a series of relapses, he turned inward and redirected his intellect to a search for the meaning of life.

Harris credits his single mother with praising his intellect and teaching him the value of setting high personal standards, but he claims credit himself for nurturing those seeds into a life philosophy he deems every bit as praiseworthy as the philosophies of superstar athletes, artists, philosophers and nobility. The can-do messages that fill Infinite Greatness include truisms, such as: remember that success is relative; never give up; feed off positive energy; “act like a champ and think like a king.”

The author quotes philosophical messages he learned from studying Buddha, Socrates, Greek mythology and the ancient Egyptians. He also names modern icons, such as Beyonce, Barack Obama, and Mohammed Ali, who exhibit character traits he admires, including positive thinking, perseverance, and skill at managing change.

Unfortunately, his highly repetitive narrative dwells in abstractions and generalities at the expense of the practical suggestions he promises on the book’s back cover. When it comes to the abovementioned icons, for example, he fails to explain the steps they took to cultivate these traits so that readers can follow their examples. Similarly, many of his action messages (elevate your thoughts; live up to your destiny, etc.) are mere platitudes, offered without advice on how to achieve these things.

Those who appreciate abstract discourse may find rewards here. Readers looking for an emotional connection to the material, however, are likely to be disappointed, as will those hoping for actionable instruction on how to make changes in their lives.